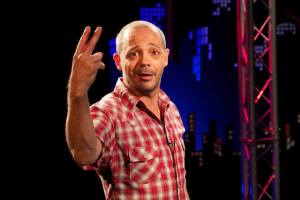 CJ Fortuna in ‘The Heckler’

MELBOURNE actor and comedian CJ Fortuna has made his craft his life, and dedicating your life to it is what it takes to succeed in Australia he said.

Fortuna started his career as a teenager actively participating in theatre groups and at 20 began weekly stand-up gigs at a local theatre restaurant in the Victorian country town of Warrnambool where he grew up.

After a stint acting and hosting at the restaurant he soon moved on to the Melbourne comedy scene.

It wasn’t easy at first Fortuna said, but perseverance, luck and a bit of innocent prodding can get you through a lot of doors.

He said one of the hardest things is to put together the material and finding your own unique voice; anyone can get on a stage but you need to have material that appeals to an audience or you’ll get booed off.

“Becoming a good joke-writer is one of the hardest things that you have to do,” Fortuna said.

Comedy and acting has always worked hand in hand for Fortuna who has starred in many ads and had stints on Neighbours, Stingers and several comedy TV shows and Comedy Festivals, but ultimately he sees himself as an actor first.

He said finding work in Australia is a constant battle as the market is so small and pays very little in comparison to the US or UK.

“The stand-up market is quite strong at the moment in Australia, particularly in Melbourne but if you went overseas you could double that,” Fortuna said.

Fortuna starred in the recently released feature film The Heckler about a stand-up comedian who gets body-swapped with a persistent heckler (Fortuna).

The Heckler won an award for Best Ensemble at the LA Comedy Festival 2015 and opened to great reviews in Adelaide, Melbourne and Sydney.

Even though The Heckler is a quality local product the director of the film, Ben Plazzer (The Comedy Cartel) had to crowd fund the launch in Australia  (www.thecomedycartel.com.au).

Mr Plazzer said the local market is so small they had difficulties getting distributors to even look at the film.

“We understand the problem lies in the struggle to get the audiences in to buy the tickets, audiences won’t go to see a locally produced film over a block-buster from the US, and so the distributors can’t justify the investment.

“The old style of distribution and exhibition has to change,” Mr Plazzer said.

He said we’re likely to see more of a move to the online and direct streaming solutions in the future but the ones already in the market don’t provide enough Australian content.

Film Victoria were unavailable for comment, but also provide funding incentives to attract television and film projects to the state (www.film.vic.gov.au).

Even with less money and fewer jobs, Fortuna loves working in Australia.

“Australia is like a small town, once you’re in the club you get a lot of work,

(See full CJ Fortuna interview and The Heckler trailer below)